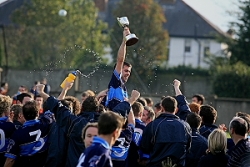 In early 2002, a group of football enthusiasts met in the bar to discuss the possibility of entering a third Junior Football team, which would give players an opportunity to represent the Club who, for various reasons, had put their football careers on hold.

The "Dream Team" as it is affectionately known, was the brainchild of James Durkan and Anto Gilleran. James and Anto had previously played Junior Football for the Club, but in the intervening years had taken to discussing the game in the bar rather than participating in their playing fields. It was as a result of these late night discussions that they discovered there was a number of a like minded individual who were interested in playing football but didn't want to give the necessary commitment required to play on the existing Junior teams in the Club.

Anto ChristyBefore approaching the Adult Games Committee, they had to make sure that there were enough players interested to make the Club's while entering the team. So James and Anto canvassed players who had played on the Junior B team under Christ Kilcoyne in the mid 90's but had stopped playing. Players like Paul 'Dougal' Byrne, Barry Lawlor, Mick Tobin, Declan O'Reilly, Eamonn Hartnett and Pat O'Brien had been on those teams and relished the opportunity to make a comeback. A number of hurlers also agreed to get involved, such as Gerry Ryan, SeÃ¡n Fallon, Barry Heraty, Colm Ryan and Alan Kennedy. Brian Woods, who was active in the juvenile section of the club, was also persuaded to come bout of retirement. The rest of the panel was made up of younger players in the Club who were interested in the Dream Team's vision that football is to be enjoyed. Players like Dave Carroll, Ronnie O'Brien, Gareth Evans, Clint Storey, Neville, Mervyn and Carol O Boyle and Paddy Evoy.

The 2002 season was not a particularly memorable one for the Dream Team as they struggled to find their feet in the early stages of the league. The few years away from Dreams Before 2playing football was obvious at the beginning of the season but as the year progressed, there was a gradual improvement.

Although the league was not going to be won in the first season, a respectful finish was achieved before concentrating on the Junior D Championship. Despite training very hard for the first round, they were defeated by Oliver Plunketts/Eoghan Ruadh and the panel then had the winter months to reflect on what might have been.

As the panel returned to training in early 2003, it was obvious that things were going to be different. The panel had grown considerably in size. Newcomes to the Dreams were John Walsh, Derek McGrath, Keith McDonald, Jimmy Harlow, Conor O'Riordan, Alan Linnane and Thomas and Eoin Mangan, who had recently returned from Australia. The Dream Team now had an international dimension with the addition of Matt Brennan, Craif Higgins and Keving and Bruce while the management team had been joined by Mervyn O'Boyle.

DPP 29Training was stepped up from the previous year and performances had improved drastically as a result. This concentrated effort resulted in a significant improvement in performances. The quality and fitness began to show in the team and each win increased the belief within the team. That year the "Dream Team" rode the crest of a wave all the way to a Championship Final where they were eventually victorious. This incredible story all stemmed from the bar when James and Anto sat down and discussed putting together a rare collection of players. Inspirational stuff for everyone!